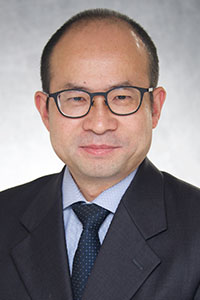 Long-Sheng Song, MD, MS, Professor in Cardiovascular Medicine, has received a two-year, $200,000 Innovative Project Award (IPA) from the American Heart Association. Song will use the IPA to examine the role of junctophilin-2 (JP2) in smooth muscle physiology and in vascular disease, including hypertension. JP2’s function as a regulating protein in cardiac and skeletal muscle has been established, forming junctional membrane complexes (JMC) between the plasma membrane and sarcoplasmic reticulum and allowing for ion channel crosstalk.

“JP2’s potential contribution to vascular diseases has not been studied,” Song said. He and his colleagues hypothesize that JP2 is required in arterial vascular smooth muscle cells for blood pressure regulation and that deficiencies in JP2 contribute to hypertension. They have developed a hypertensive mouse model to test both of these questions. By measuring the expression of JP2 in their mesenteric arteries, Song hopes to determine the physiological role of JP2 in vascular function and whether its dysregulation leads to vascular disease. In his search for a new therapeutic target in hypertension and better management of cardiovascular disease, Song will incorporate a multidisciplinary approach that includes electrophysiology, molecular biology, pathological models, and high-resolution confocal imaging techniques.